If you have problems running Ant on the Mac, try setting the $JDK_HOME environment variable with export JDK_HOME=“/Library/Java/Home”

On Windows, extract the files from the compressed folder gwt-2.10.0.zip. On Mac or Linux, you can unpack the package with a command like:

The GWT SDK doesn’t have an installer application. All the files you need to run and use the SDK are located in the extracted directory.

You can create a new demo application in a new MyWebApp directory by running webAppCreator:

The webAppCreator script will generate a number of files in MyWebApp/, including some basic “Hello, world” functionality in the class MyWebApp/src/com/mycompany/mywebapp/client/MyWebApp.java. The script also generates an Ant build script MyWebApp/build.xml.

To run your newly created application in development mode: 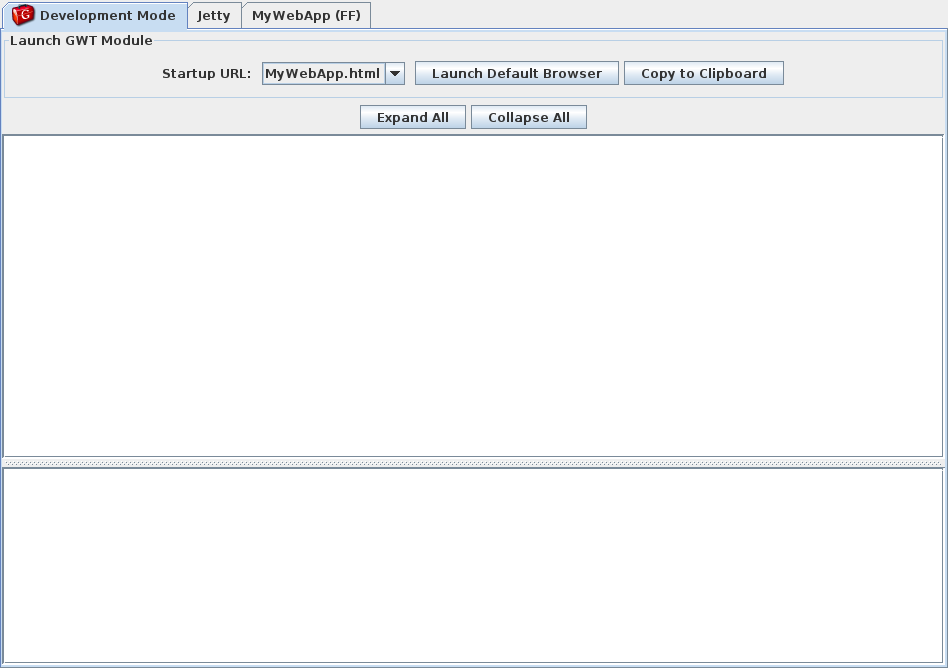 Launch the local server in a browser by either 1) clicking “Launch Default Browser” or 2) clicking “Copy to Clipboard” (to copy its URL), then pasting into Firefox, Internet Explorer, Chrome, or Safari.

The starter application will load in Super Dev Mode as follows: 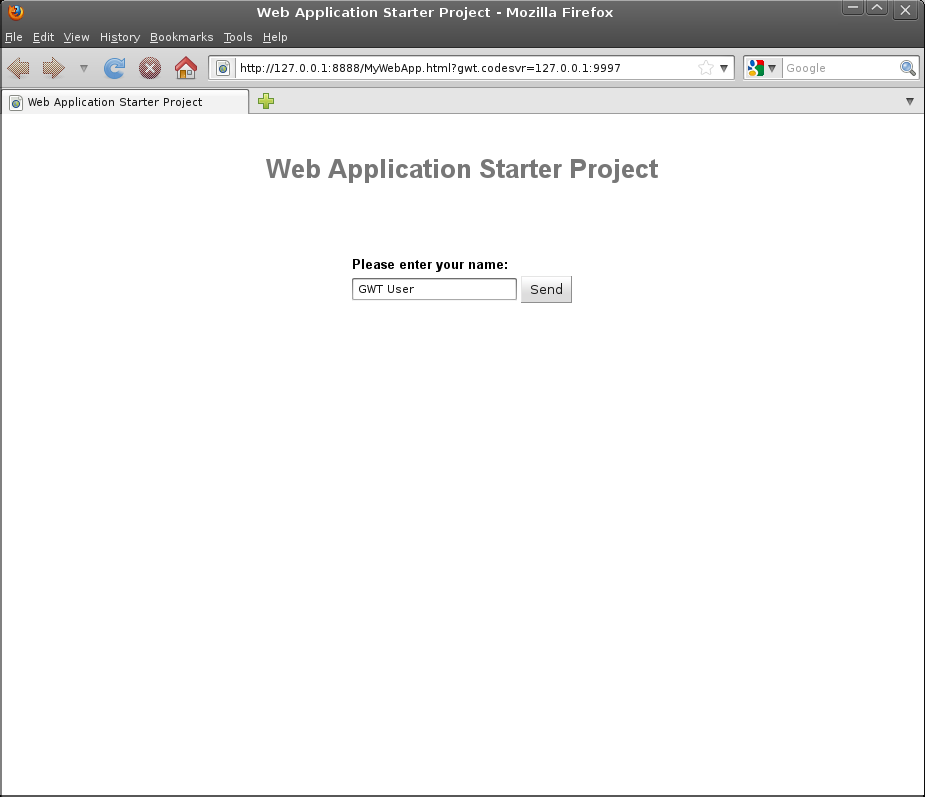 The source code for the starter application is in the MyWebApp/src/ subdirectory, where MyWebApp is the name you gave to the project above. You’ll see two packages, com.mycompany.mywebapp.client and com.mycompany.mywebapp.server. Inside the client package is code that will eventually be compiled to JavaScript and run as client code in the browser. The java files in the server package will be run as Java bytecode on a server, in the case of this Quick Start on the App Engine servers.

Change the text from “Send” to “Send to Server”.

Now, save the file and simply click “Refresh” in your browser to see your change. The button should now say “Send to Server” instead of “Send”:

Compile and run in production mode

The “build” Ant target invokes the GWT compiler which generates a number of JavaScript and HTML files from the MyWebApp Java source code in the MyWebApp/war/ subdirectory. To see the application, open the file MyWebApp/war/MyWebApp.html in your web browser. The application should look identical to the development mode above.

Congratulations! You’ve created your first web application using GWT. Since you’ve compiled the project, you’re now running pure JavaScript and HTML that works in IE, Chrome, Firefox, Safari, and Opera. You could now deploy your application to production by serving the HTML and JavaScript files in your MyWebApp/war/ directory from your web servers.

Set up an IDE

Now that you’ve created your first app, you probably want to do something a bit more interesting. But first, if you normally work with an IDE you’ll want to set up Eclipse to use the GWT SDK:

If you are going to stick with the command line, check out Speed Tracer and then head over to Build a Sample GWT App.